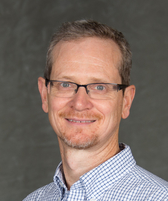 Peter Olmsted received his PhD in Physics from the University of Illinois @ Urbana-Champaign in 1991, where he studied the theory of liquid crystal hydrodynamics and non-equilibrium phase transitions. Following post-docs at Exxon, Cambridge, and the University of Michigan, where he worked on a variety of soft matter physics topics (membrane, polymers, biophysics, liquid crystals and liquid crystalline elastomers), he moved to Leeds in 1996 for a University Research Fellowship. He became Professor in 2005, and led the Soft Matter Physics group in Leeds from 2008-2013. In 2014 he moved to Georgetown University in Washington DC, as Joseph Semmes Ives Chair in Physics, where he joined the new Institute for Soft Matter Synthesis and Metrology.

Olmsted is a Fellow of the Institute of Physics (UK), and a Fellow of the American Physical Society (Division of Polymer Physics), and he was awarded the British Society of Rheology Annual Award in 2008. His research achievements include include models for polymer crystallization at rest and under flow, explanations for shear banding in complex fluids such as polymer and surfactants, and an experimental-computational study that revealed how mechanical force unfolds proteins. While in the UK he was in several European Union networks on Soft Matter, and led the EU Integrated Training Network DYNACOP (Dynamics of Architecturally Complex Fluids) from 2008-2012.

Olmsted’s current research is mainly theory and computer simulation, and includes rheology, dynamics and instabilities in soft matter, polymers, lipid membranes, and proteins. Common threads in his work are phase transitions, non-equilbrium phenomena, and fluctuations. He works closely with experimentalists, and often on industrially-motivated problems.